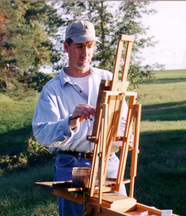 Michael Albrechtsen was born and raised in Bountiful, Utah and now resides in Olathe, Kansas
with his wife and three children.Michael completed three years of technical drafting before realizing
his true love of fine art. He summarizes his vision:
"I want to transfer whatever I see that moves me, to my canvas. The greatest thing about being
an artist is the opportunity to convey my feelings about a subject. My greatest reward is when
someone viewing my artwork feels the same."

• Judges Award of Merit, Arts for the Parks

Back to Michael Albrechtsen Images