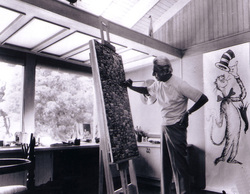 Dr. Seuss at Work in his Studio
A PERSONAL NOTE ABOUT THEODOR SEUSS GEISEL

I retain a most vivid picture of Ted standing in his studio before his easel, palette in hand, brush poised.
He would lean forward and then back on his heels, head cocked to one side and then the other. This artistic "dance" step was repeated over and over again. He enjoyed working after midnight - seldom during the working-day hours. He did not consider painting to be "work," so it had to wait till late at night. Painting
was what he did for himself and not something he felt comfortable in sharing. I recall a particular oil painting - now known as "A Plethora of Cats" - in which there are dozens upon dozens of cat heads of all different sizes. There was never an actual moment he could feel he had indeed finished - that is, he painted the last feline head. He would periodically step back and put it aside for a while. Then, inevitably, when the spirit again moved him - or he was on book hiatus - he would find room for just one more cat face. This happened over and over again. I have attempted to recall the very last cat face with special tenderness, but I cannot. I remember telling Ted that there would come a day when many of his paintings would be seen and he would thus share with his fans another facet of himself - his private self. That day has come. I am glad.


For nearly sixty years, Theodor Seuss Geisel has delighted millions worldwide with his fanciful and oftentimes surreal world in which moral and social tales unfold with the ease and excitement of a perpetual child.  His unbridled creativity and his ability to touch the hearts of children, parents and grandparents alike goes unmatched within the 20th century art world.  Just as the great illustrator Norman Rockwell utilized the cover of the "Saturday Evening Post" to reach an audience beyond the scope of most artists, so too did Dr. Seuss with his 44 books for children.  With books such as Green Eggs and Ham, the third largest selling book in the English language, Seuss found a showcase for his work which yielded a following larger than any other artist in history.

In his introduction to Seuss's 1987 retrospective exhibition, Steven Brezzo, Director of the San Diego Museum of Art, writes, "Why were these works so important to us?  Perhaps because Dr. Seuss accepted for a fact our own youthful artistic openness.  Every page was a new and stimulating visual adventure with an endless variety of amusing creatures and expressionistic sets. Like his stories, his text illustrations were a poke in the eye of literary and artistic convention."

Dr. Seuss' work heralded a new age of social and political commentary, while many of his illustrations reached new heights of artistic expression with their bold sense of graphic design, whimsy, and surreal sensibilities.

The Art of Dr. Seuss is a tribute to all of those fantasy worlds and characters which continue to spark our imagination and challenge our own perceptions.  It is an opportunity to rekindle the spirit of youth... and to capture a piece of American history.

View the Art of Dr. Seuss