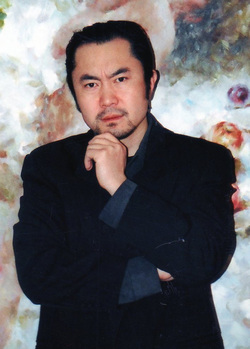 Stephen Pan has been immersed in fine art all his life. For generations, his family has been renowned in China for artistic talent. At the age of five, his grandfather, Bo Yin Pan, famous for calligraphy and poetry, gave him his first lessons in drawing and painting techniques. Ironically, in spite of his close relationship with formal Chinese traditions in art, Pan fell in love with the paintings of renaissance and French impressionist periods. By 13, his artwork had been featured in a one-man show, and had won the first of a series of National Art Excellence awards in China for his beautifully rendered oil paintings.

Born in Shanghai in 1963, Pan entered Chinese society at the height of the Red Guard’s power; the destruction of all things not purely Chinese was in full force. Even after the Red Guard was disbanded, it was years before China opened its doors and welcomed outside cultural influences. Pan began his teaching career in Shanghai at the age of 20 and found his young students were eager to study art.


When he was 22 years old, his oil painting “Red Cross” was acquired by the Beijing central Art museum, an extraordinary honor for a Chinese artist. That same year, 1985, Pan got in trouble when he and an artist friend began a painting of a nude female figure from a live model. Pan answered a knock at the door of the studio; it was the police. Both artists were questioned and their drawings confiscated. The detailed accuracy of Pan’s drawings were “proof” that the nude model was a prostitute; his friend was forced to confess and was sent to jail for four years for illicit conduct. It was then that Pan vowed he would leave China and devote his life to painting and drawing anew. His uncle sponsored his immigration to the United States to continue his artistic career.


In 1997, he was offered a position at the Academy of Art College in San Francisco. His mastery of the figure and use of light in creating subtle textures and expressions served him well. His students voted him best teacher in the Fine Arts Department.  He was invited to take on more students, but declined in order to devote himself full-time to oil painting. In 2005 Stephen was given special recognition by the National Portrait Society of America.

Stephen Pan’s paintings are included in the collections of art lovers all over the world.