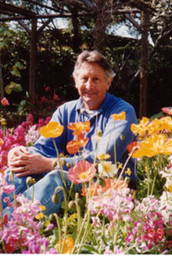 "There are more flowers than you can possibly have in one place."

As a young boy John Powell spent many hours with his father,
a prominent artist in California. John was supplied with a canvas and
paints to him occupied during his visit to the studio. Such occasions
proved to bean important first step in John's career.

John recalls one weekend in particular when he spent many long hours in the studio listening to his father discuss color.  "I was on the bus going home to Hollywood.  The evening was warm and the shadows strong.  Suddenly it hit me like a mallet on the head; there it was all the colors they were talking about.  The trees weren't just green; they were blue and purple and orange.  I remember that experience like it was yesterday; I think of it as my awakening."  His recollection of those early years is significant, as it is not merely the facility of the hand that makes the artist; it is the ability to see.

John enlisted in the Navy after graduating from high school and spent two years in Japan. This environment was instrumental in John's development as it was in Japan that he became acutely aware of his artistic needs.  His drawings from this period reflect the Far Eastern influence and design elements that provide the foundation for his unique style of painting.

After four years in the Navy, John enrolled in the Mexico City College in Mexico City, which is known for its excellent art department.  The influence of the primitive arts of Mexico made an indelible imprint which would be forever expressed during John Powell's successful career as a renowned painter.  Upon his return to Los Angeles, John made a serious effort to establish and art career. During this period, leisure time was passed with other artist, including his friends, John Altoon and Ed Kienholz, at their well known haunts, Barney's Beanery in West Hollywood.

John's extensive travels in search of the unusual and the beautiful provide an element of special character in his paintings.  The artist's broad understanding of the beloved artifacts and   vases, from his extensive personal collection, lends authenticity and a distinctive quality to his work, creating a mosaic of colors and patterns when juxtaposed against flowers and fabrics.

When the viewer closely examines his work, one discovers a unique, self-taught approach that is unlike any other artist.  The growing popularity of John Powell's work comes from the energy of his vision, the years of unique personal experience and the technical talent to create a very personal style of fine art.

Today, John resides with his wife near Santa Barbara, California. His home and studio have the unmistakable feel of his creativity. A collection of wood carv­ings, weather vanes, ceramic pots, old model airplanes, exotic fabrics and unusual antiques delight the eye. The aesthetic gardens reflect his love of flow­ers and the magical drawings poetry his never-ending humor.

This extraordinary artist has participated in numerous major world wide exhibitions.  His paintings are in various private and corporate collections and are sought after my collectors everywhere.

Back to John Powell Images