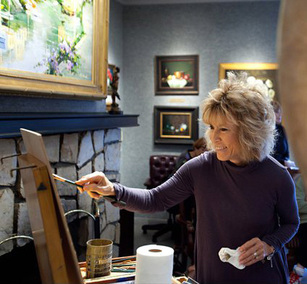 Marilyn Simandle has always known that she would become an artist. Learning from her mother, a musician and painter in her own right, Simandle started painting watercolors at age 6. She received her Bachelor of Fine Arts Degree from San Jose State University. Simandle went on to share her developed knowledge and incredible talent by teaching art and conducting workshops throughout California and at
the Scottsdale Artists' School for the past 15 years. A native Californian, she now resides in the Santa Ynez Valley with her husband, Ted Goerschner, also an artist, where she explores all her passions: painting, gardening, playing bridge, golf and horseback riding. In her paintings, Simandle tries to convey her own personal philosophy of art. She loves to explore the complex interplay of light and its effects
on architecture and surroundings. An avid traveler and photographer, Marilyn uses her photographs simply as the starting point, an inspiration. In her composition, she paints what she wants the subject matter to be, engaging collectors with uplifting paintings filled with harmonious color, depth and vitality. While striving for truth in her paintings she does believe that "perfection is the enemy of great art.
" A single brush stroke can speak volumes in a painting. Simandle is inspired and influenced by the poetry in the brush strokes of
John Singer Sargent and Joaquin Sorolla.

Marilyn has exhibited in more than 80 one-woman-shows across the nation in the past 30 years.

BACK TO SHOP for ART - Marilyn Simandle