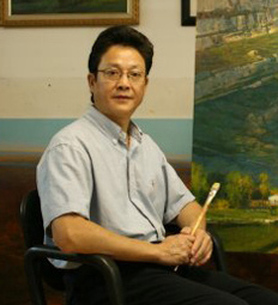 "As the creative process is the product of the artist's soul, it is essential that
he posses an abundant resource of unique personal experiences and observations.
Only by painting his soul into a work of art  can an artist demonstrate his
unique understanding of life and beauty."

Ming Feng was born on June 14, 1957 in Guangzhou (formerly Canton ), China . Guangzhou , known as the " Flower City ," is situated
in a subtropical area surrounded by lush trees, crisscrossing rivers and babbling brooks. "Nature's beauty stirred my longing for art
and its colorfulness gave wings to my imagination. I could not help but attempt to capture its beauty on paper. Perhaps that was the burgeoning of my passion for art. I was twelve."

That year Ming was admitted to the Guangzhou Municipal Teenage Art School . Upon graduation, he enrolled at the Guangzhou Art Academy . There, he studied artistic theories and philosophy of both Western and Chinese art. Before arriving in the United States ,
Ming achieved prominence as an acclaimed artist in his native China . In 1975, he became a set designer for the Modern Dance
Troupe of Guangzhou. Later, for five years (1978 to 1982), he worked as a commercial artist for the Guangzhou Art Design Company.

Ming has exhibited internationally and received many awards. His works are in the permanent collection of the Guangzhou Art Museum . The artist was honored by the Beijing People's Publishing House, which in 1982, published its annual calendar dedicated exclusively to twelve of his paintings. In 1988, Ming immigrated to the United States with his parents and settled in New York . The diversity of art there broadened his horizon while the market offered him more opportunities to show his paintings.

In 2001 Ming became a proud American citizen. Born on Flag day, he often paints the American flag in his paintings. With his wife Lily,
and young son, he lives near New England 's Cape Cod , which today still remains his favorite place and the source of his inspiration. His paintings and fine art graphics are in Worldwide Private and Corporate Collections. Commission – Grand Disney Hotel, Orlando , Florida .

1986 Guangzhou Academy of Fine Arts with

Permanent Collection of the Guangzhou

Including the Grand Disney Hotel, Orlando, Florida
Back to Ming Feng Images